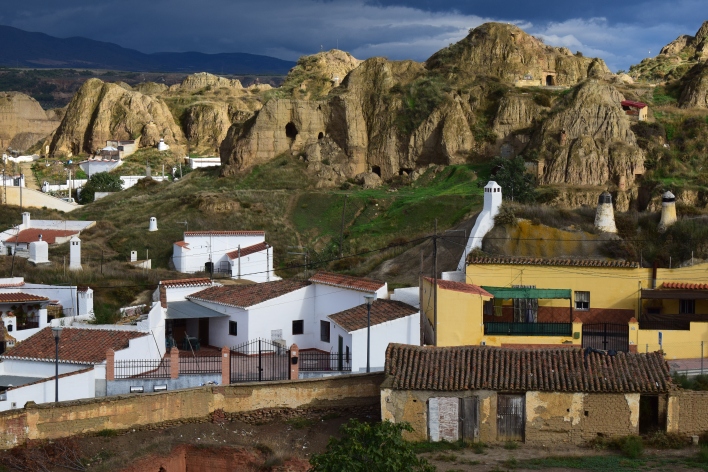 Guadix, a Moorish town in Granada region with a vast and extraordinary cave district, named Guadh-Haux (“River of life”). It’s cave district Barrio Santiago still houses around 10.000 people, most of them not being gitanos or gypsies, as we would maybe think first. (The term “Gitano” was used in Spain, and it is derived from the word “Egypt,” since the first arrivals claimed they were from the Nile region.) As Federico G. Lorca wrote in the lecture about his Romancero Gitano poetry: ‘… gipsy is not only what is the dearest and most aristocratic in my country, but also the most characteristic in definition and keeping fire, blood and alphabet of Andalucia’s and universal truth.’’ 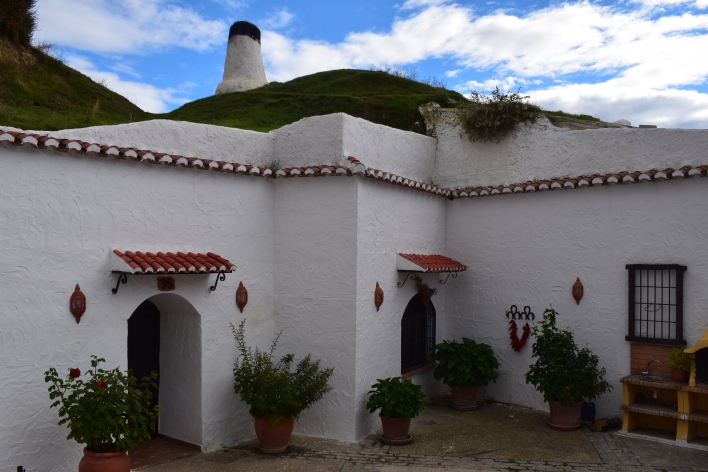 When you start strolling around the quarter, you see properly equipped houses with lovely gardens, electricity and running water. When you are walking deeper in the suburb, cave houses are getting simpler (whitewashed front, a door, tiny window and a chimney) and experience increasingly voyeuristic. 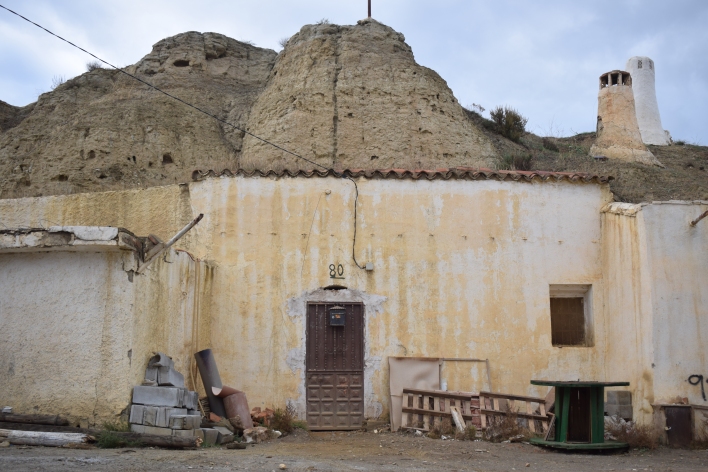 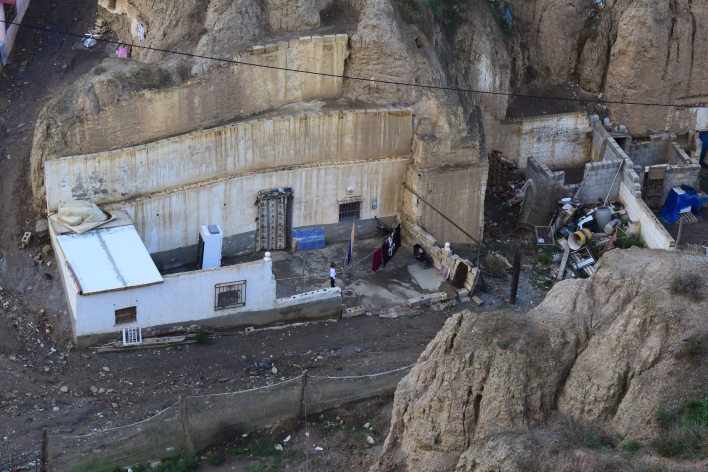 Andalucía in general is pretty interesting for alternative forms of living. People live in caves in Granada (Sacramonte). There is Beneficio hippie community in the Alpujarras, for which we still want to figure out if they spread more than peace and love. There are several ecoaldeas (ecovillages) which are trying to live sustainable, implementing creative ideas (e.g. washing machine on bicycle power), creating new forms of lifestyle and try to be in connection with nature, community and themselves in various ways. As the climate is more than suitable for these communities to survive we are curious how they function in everyday life and what they need to keep it going according to the social aspect. 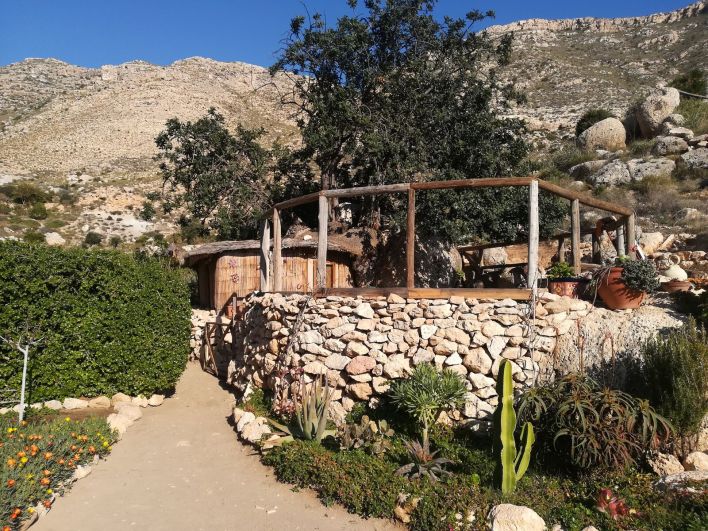 “Ecovillage is an intentional, traditional or urban community that is consciously designed through locally owned participatory process in all four dimensions of sustainability (social, culture, ecology and economy) to regenerate social and natural environments. Ecovillages are living laboratories pioneering beautiful alternatives and innovative solutions. They are rural or urban settlements with vibrant social structures, vastly diverse, yet united in their actions towards low-impact, high-quality lifestyles.” Source: GEN (Global Ecovillage Network, https://ecovillage.org/)

Before we started travelling I was reading the book Ecovillages; Lessons For Sustainable Community by Karen Liftin, a professor of political science and environmental studies.  She visited fourteen ecovillages to learn from them and discover all four dimensions of sustainability. It is an eye-opening book that shows what is possible according to alternative forms of living. (More about the book here: https://ecovillagebook.org/)

We were interested in visiting an ecovillage in Andalucia, precisely in Almeria as it was in the area we wanted to explore more. Furthermore, we contacted a few by email. Cortijo Los Banos Al-Hamam turned out to be completely full, Sunseed organisation (Los Molinos del Rio Aguas) required advanced booking and payment for the amount of time you want to stay there. Pita Escuela invited us for a jam session they organise. Meanwhile our time in Andalucia was running out. We decided to leave the visit of an ecovillage for later on; preferably we would like to volunteer or stay for a longer period of time. You don’t get all the knowledge and get to know all the people in a short visit, we thought.

Last week we went trekking along the coast of natural park Cabo de Gata. It is the only European desert with plenty of beaches and stunning hinterland. I was discovering the coast already in February and this is how I got to know San Pedro. It is a tiny village you can only approach on foot, around 4 km from the fishermen village Las Negras. People built their own clay and stone houses or squat a few old buildings which are remainings of an ancient settlement. The village lies just by the sea hugged by hills on both sides. As you arrive you can see San Pedro castle, which used to defend people from pirates and other enemies from the seaside. Behind it is a tiny square with water source and a wooden panel explaining the general rules of the community. Some people left their marks there in shapes of stone statues; three faces with graceful smiles. The area is settled in terraces and almost each house has a small garden. There are flowers blooming, fruit garden, broken house with a big pirate flag that looks like a meeting point, people in stretchy clothes walking to their shelters under mighty trees, compost toilets in the bushes, blue sea and music.

The question evoked how invaded they feel by visitors? I suppose the inhabitants moved here in search for peaceful and quiet life, but especially summer is cramped with people sunbathing on the beach and leaving rubbish everywhere. It is an important problem to point out because there is no waste collection. Locals have to collect it themselves, put it on a boat and take it to Las Negras. Do we, visitors, come there because of our voyeuristic inclinations, do we want to have cool holidays and party with hippies or do we want to sincerely learn something from them? How do we approach the place and the people?

We had a swim and afterwards I went to change behind a bush. A guy accompanied by two dogs kindly started talking to me about the fact that this is not a toilet. Everybody should use the compost toilets in order to keep the place clean, tidy and comfortable for living. We had a short chat and after he left, he picked up his dog’s poo from the beach and threw it in the sea, directly by the shore. I had to question the alternating rules right away. At least to me this didn’t seem such a logical thing to do if we all take care of our environment. To be honest, the whole place had a smell of decomposition. Like something would be slightly rotten. Maybe it is because of the tourists who visit the beach, animals, or the fact that, when the night comes, guys walk around with headlamps, stop by a bush, start pissing, realise they have their light on, turn it off, finish their piss and walk away. I have to admit I peed in the bushes too.

We spent the night in a pre-made shelter for a small tent we found on one of the terraces. From above it was nice to see how the place is changing in transition from day to night. A local invited us to join him and his friends in the evening and showed us the way to his house. We came to sit by the fire among a big variety of people. Beside our host there were three German girls that just arrived, a French accordionist, Louise, the yoga teacher, who made some pastel, and a Spanish woman, Mariana, who is one of the 30 people who permanently live in San Pedro. I found her very intriguing. We talked about their community, cleaning Thursdays, nasty tourists, solar panels they have on the roofs and how is it like to live with other people. She said she lives in San Pedro because she is happy there and loves to take care for the place and the people. Meanwhile she was drinking sangria and warming herself leaning towards the fire, having a small dog in her lap. Louise told us she first came to San Pedro as a child, with her parents. At that time the road from Las Negras to the village was walked with donkeys, there were less inhabitants and  buildings, but small paths in the settlement looked just the same. She decided to return for a two-week holiday to get a break from everyday’s hustle and bustle. It was definitely a heart warming evening chat. We thanked them for el fuego magico (the magical fire, as Mariana named it) and found our way in the labyrinth of small paths.

I am still wondering what is the community I would like to live in like. Nevertheless, I got inspired by the open arms they have for everyone and how green everything is, even though this is a desert area. Desert but a dessert of the South.

Maybe I should live in a Chimney Community. Squirrels fit in well.